Speaker One Sheet
Bernadine is available for lectures, keynote addresses, and workshops 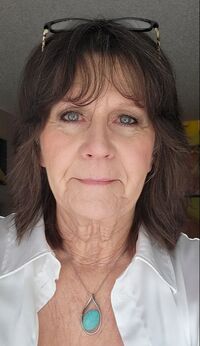 SHORT BIO
﻿Bernadine Fox is a graduate of Emily Carr Institute of Art & Design (now ECU). She is an award-winning mental health advocate and an visual artist (portfolio), writer, social activist, and public speaker in Vancouver BC who constructs narratives that explore various social issues in need of voice. For the past three years, Bernadine has produced and hosted an on-air radio program Re-Threading Madness (formerly Both Sides Now) which dares to change how we think about mental health. Bernadine Fox endured sexual and physical abuse as a child, and later at the hands of her therapist and abuser. Despite the lifelong trauma, PTSD, Chronic Fatigue and Osteoarthritis, she selflessly chooses to share her story and use her voice to shed light on the issues of mental health and abuse of power. A mental health advocate for 30+ years, she now volunteers for  TELL, an organization that provides resources and support for those healing from exploitation by their therapists or doctors. Fox raises her grandson and resides in a forest with three cats and a few ghosts.


LONG BIO
Introduction for Bernadine Fox
Bernadine is an award-winning mental health advocate who uses oral, visual (art), and written language to talk about hard social issues.  She is a radio host for Re-Threading Madness (Vancouver Coop Radio, CFRO 100.5FM) which is the show that dares us all to change how we think about mental health.

Topics for Speaking Events
​Bernadine is available for speaking engagements including lectures, workshops, keynote, podcast, radio, print, and TV.
​
​​Therapeutic Issues for Survivors of Unethical Therapists: How they groom their victims. What the abusive therapist does when that relationship is over. The fallout for the survivor. Issues around healing. How to survive.

Dissociative Identities: Pural vs Singular, Why dissociation is a perfect coping skill for a child. How DID manifests (versions). Gaining control and living a good life.
​
What Therapists Should Know: What their Clients Aren't Telling Them and Why: The reason clients don't tell their therapists everything. The ways in which therapists influence their clients that they may not know. The reason recognizing the desperate difference in power is paramount.
check drop down menu for previous organizations that have hired Bernadine to speak 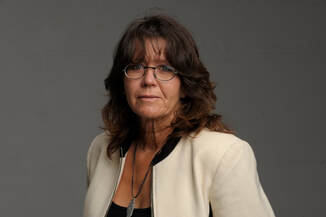 Why Bernadine?
Few people can talk about mental health like Bernadine does.  She has lived on one side of the issue and worked on the other and with that she is able to navigate the fence that exists between them with ease taking complex topics and making them easily understandable for everyone.
Books 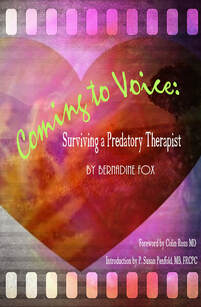 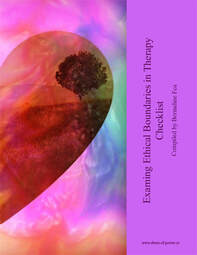 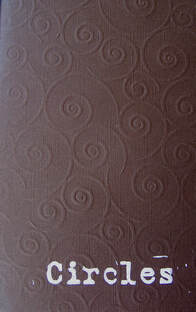 ​
Circles: A Short Story about a Battered Woman
What People Say About Bernadine's Lectures, Workshops ...

In the nearly four decades that I have been doing this work, I have never met anyone as energetic, creative, and determined as Bernadine, this despite her horrendous history of childhood and domestic abuse, having been sex-trafficked as early as age 9, having struggled with dissociative identity disorder (D.I.D), and having suffered a prolonged period of emotional, sexual, and financial exploitation at the hands of an esteemed mental health professional, one who, through Bernadine’s efforts, was ultimately unmasked as a monster. ...  The people who reach out to us are overwhelmingly traumatized and despondent.  Many are actively suicidal. In her on-line work with them, Bernadine has shown herself to be empathic, kind, wise and level-headed.  Victims feel reassured in their contact with her—and many believe that if she has been able to survive, they can as well.  She is also an insightful and reliable collaborator when her sister Responders request thoughts and ideas as to how to handle a particular situation. Without question, Bernadine has used her own experience and courageous recovery generously and intelligently to help others.
Jan Wohlberg/TELL
****
Gallery Gachet 's motto is Art is a means of survival (Yoko Ono). Bernadine embodies this in her personal work but also in her dedication as a teacher to helping others through art and self expression. Her artwork reflects her commitment to educate viewers about mental health and de-stigmatize those with lived experiences. Thus, over many years she has touched the lives of many people and continues to do so. She has been a consistent and dedicated supporter of our gallery's mission over many years being thus instrumental in our artist run center getting recognized as a leading artist run center this year by receiving the runner up Lacey Prize from the National Art Gallery of Canada.  ... [Bernadine] exemplifies resilience in overcoming challenges and transforming this knowledge to help others learn and cope in order to survive and heal.
Bruce Ray, President/Gallery Gachet
****
​​Bernadine’s natural ability to collaborate with diverse groups of people, facilitate difficult conversations, and articulate experiences and perspectives often misrepresented by mainstream media are behind the show’s success. Bernadine bravely goes outside her comfort zone every day, whether it’s learning how to operate a radio studio from the ground up, or speaking her truth to power, particularly when it comes to the negative impact on mental health consumers due to lack of industry regulation.
Bryan McKinnon/Vancouver Coop Radio
****
​continued in drop down menu below...
What People Say About Bernadine's Lectures, workshops... (cont.)
cont....
****
You touched hearts. You changed minds. You showed how art and professionalism make a difference. And everyone had a look at what real courage looks like.
Anonymous
****
​Excellent
Anonymous ****
​Bernadine took what seemed like complicated material and laid it out in a a simple, straightforward, and level-headed manner.  Grateful.
Anonymous
****
​Bernadine is a living example of the resiliency so needed in times of crisis and uncertainty that people are facing now. ...  I’ve known her as an artist and a mental health advocate. She exemplifies a level of compassion and deep understanding of healing from trauma not just surviving
but thriving despite the challenges life presents to us. She has integrated these skills into initiating change within organizations, informing gaps in the justice system in BC, supporting and developing resources across a broad scope of community needs.
Haruko Okano, Britannia Art Gallery
****
​Articulate and moving. Profound
Anonymous
****
​After Bernadine's presentation: "I am prepared to support and work to make regulation of counselors a reality in British Columbia."
Anonymous
****
​Bernadine’s style was very affirming and open—she provided very useful, clear information that validated and challenged me to learn more.
Anonymous
How Bernadine can promote your event
I will post your event on all my social media platforms for 1 month to 2 weeks leading up to the event. (see below)
Links to Bernadine's social media
Bernadine Fox (artist/author)
Rethreading Madness (radio)
SUGGESTED HASHTAGS FOR BERNADINE
#mentalhealth #DID #multiplepersonality #plural #abuseintherapy #metoo #mentalhealthawareness #sexualabuse #sexualassault #abuse  #domesticviolence #survivor #rape #trauma #sexualviolence #childabuse #ptsd #rapeculture #emotionalabuse #rapevictim #feminism #rapesurvivor #consent #womenempowerment #sexualharassment #feminist #domesticabuse #healing #women #physicalabuse #awareness #nomeansno #abusesurvivor #cptsd #ReThreadingMadness #bothsidesnow #VancouverCoopRadio #CFRO #BernadineFox #radioshow #podcast #publicaffairs #youtube #selfcare #selflove #anxiety #mentalhealthmatters #depression #health #mindfulness  #loveyourself #inspiration #mindset  #wellbeing #recovery #ptsd #art #trauma  #mentalhealthsupport #growth #mentalhealthadvocate #humantrafficking #stigma 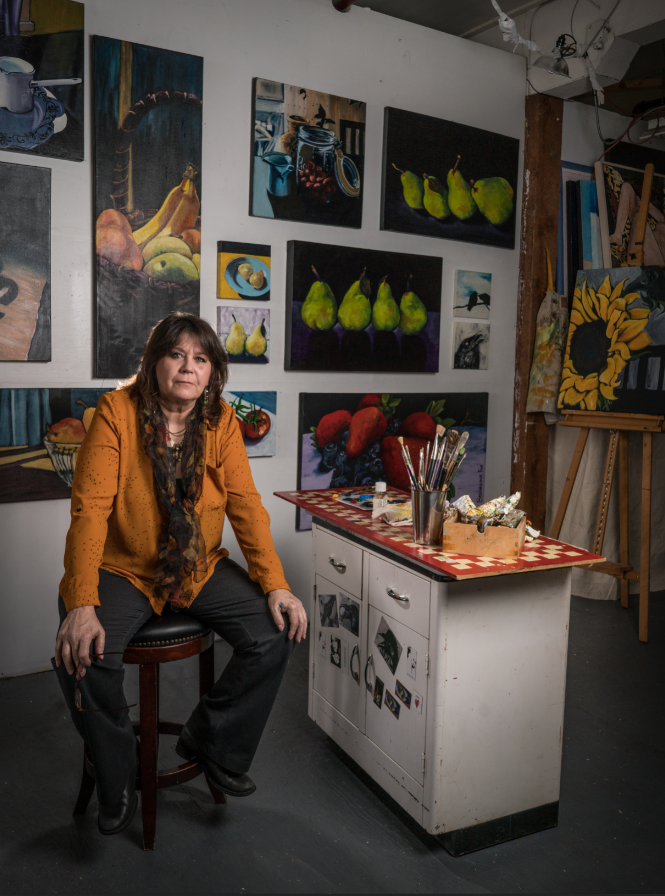 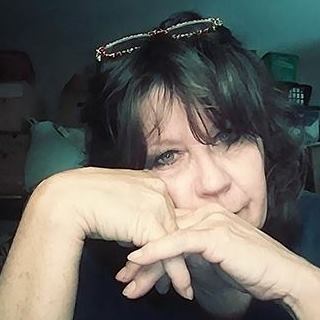